an ode to the little black dress 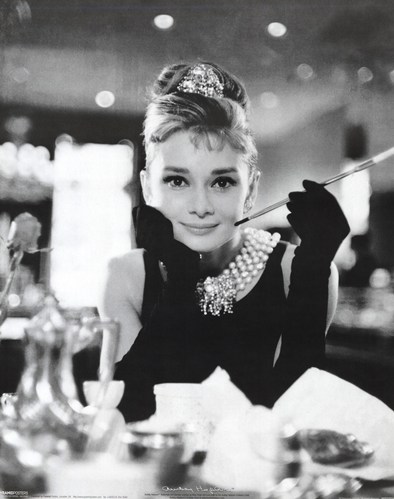 Audrey Hepburn, her hair piled on top of her head, draped in Tiffany jewels and wearing that Givenchy black dress, cigarette holder in hand as she smiles coyly. How that image - the image that catapulted Audrey from ingenue to fashion icon when Breakfast at Tiffany's premiered 50 years ago - came to be is the subject of Fifth Avenue, 5 A.M., the charming book by Sam Wasson that I read cover to cover over the weekend.

Breakfast at Tiffany's is one of my favorite movies of all time, for so many reasons. Despite its flaws (hello, Mickey Rooney as Yunioshi), the story of Holly Golightly, the little call girl who could, is so absolutely endearing and romantic, Audrey so incredibly chic and fabulous.

And there's that Givenchy dress.

I knew that the little black dress, now known simply as the LBD, was popularized in the U.S. by Audrey, but until reading Fifth Avenue, 5 A.M., I had no idea how scandalous and subversive it was at the time the movie came out.


It was the late 1950s, a time when conformity - women pretty and perfect in the kitchen, men bringing home the bacon - was the norm, and sex was completely taboo. As Wasson writes in his book, in the 1950s contemporary ideas about black originated in the Victorian era, when it was the official color of mourning. Women would wear all black, sometimes for years, after their husbands' deaths. Wasson writes, "...it was a surefire sign of widowhood. To men passing by, it signified the wearer's knowledge of sex. It meant experience."

Black was popular with the flappers of the 1920s, and Chanel helped make it ubiquitous in Europe, but in the post-war 1950s, "color was once again the emblem of femininity" in America. "Just look at the movies: only the bitches wear black...when it's seen on women, black's symbolically charged intimations of power, sexual knowing, and reversals of traditional passivity make it the color of choice for all those women the movies think we should be worried about," Wasson writes.

So how did good-girl Audrey, whose most prominent roles at that point were a princess (Roman Holiday) and a nun (The Nun's Story), end up turning society's perceptions of black on its head?


Wasson says of Givenchy's choice to clothe his friend and muse, Audrey, in black:


Black might not have been such a distinctive choice were it some degenerate wearing the dress; indeed, it would have been the obvious move. But seeing how this was a dress to be worn by Audrey Hepburn - and not at night, but in the very early morning - it was unusual to say the least. Because it's Audrey - wholesome, wholesome Audrey - there is irony in her endorsement of a color heavy with unchaste connotations. More than merely quirky, the contrast is sophisticated. Black on Audrey Hepburn gives her an air of cunning - just as anyone who turns something outre into an asset appears somehow masterly. That's the essence of glamour.

After Breakfast at Tiffany's, black was no longer the province of Hollywood femme fatales and uber rich women who could afford European couture. Audrey Hepburn as Holly Golightly democratized the LBD, bring chic simplicity to women across the country. "Because of its simplicity, any little black dress would do the trick...," Wasson writes. "What's more, its simplicity wasn't just pragmatic, it was an assertion of self. Pure understatement radiates confidence - individual personality as opposed to a prefab femininity."

So here's to Audrey Hepburn and the little black dress. Long may it reign, bringing glamour to girls around the world who want to be anything but prefab.
Posted by paper + cloth at 11:51 AM