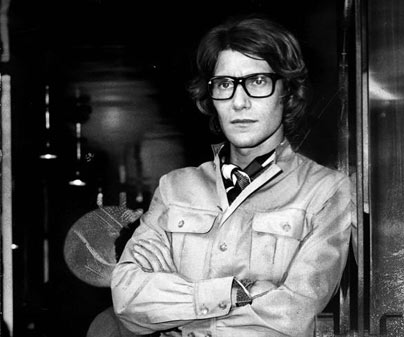 As I mentioned yesterday, next week I head to Denver for the "Yves Saint Laurent: The Retrospective" exhibit, which is making an exclusive U.S. appearance at the Denver Art Museum. On view March 25 through July 8, the exhibit covers 40 years of haute couture by the legendary designer.

But what exactly makes Yves Saint Laurent, the man, such a legend in the fashion world? The answer to that is simple: he was a visionary.

Always a step ahead of the rest of the fashion world, "Yves was first with everything and has inspired practically everybody," G.Y. Dryansky wrote in Vogue in 1980. Whether celebrated (his Mondrian-inspired shift dresses in 1965 and the famous le smoking suits in 1967) or decried (safari jackets and a sheer black chiffon dress in 1968 and '40s-inspired palazzo pantsuits and platform sandals in1971), the revolutionary looks he introduced into his early couture collections are all integral parts of our modern fashion vocabulary. And while Saint Laurent rose to fame as a couturier, he was one of the first designers to sense that the future of fashion was actually ready-to-wear, and in 1966 he opened his first Rive Gauche pret-a-porter boutique. It sold $24,000 worth of clothes in the first day.


But as with many artistic geniuses, all that vision came at a price. As written in the Voguepedia entry on Saint Laurent, the designer was alternately described as "'a very strong character who knows exactly what he wants' (by Susan Train, writing in Vogue) and as having been 'born with a nervous breakdown' (by his longtime partner, Pierre Berge). Yves Saint Laurent built a groundbreaking fashion empire, only to feel so trapped by its ritualistic demands that he sank into depression and self-abuse."

His journey to building the fashion empire that would consume him started in 1936, when Saint Laurent was born in colonial Oran, Algeria, to French parents. Mercilessly teased and bullied by his schoolmates for being effeminate, Saint Laurent escaped into drawing. When he was 18, he moved to Paris to study couture and soon found himself working for the most legendary couturier of all time - Christian Dior. When Dior died in 1957, Saint Laurent was promoted to head of the house at the tender age of 21.


The fashion establishment didn't appreciate the youthful energy he brought to his Dior couture collections,  and in 1960, after clients were outraged by his Beat-inspired collection, Dior's business heads had him conscripted into the army, where he soon suffered the first of many breakdowns. The treatment he received at a psychiatric hospital scarred him for life. While he was away, Saint Laurent was replaced at Dior, so Berge (who saved him from the psychiatric ward) laid the foundation for opening their own couture business.

In 1962, Yves Saint Laurent opened for business, and the designer was skyrocketed into a level of success he couldn't endure. He turned to drugs, drinking and clubbing to cope, but in 1973, the house transitioned to a four-shows-per-year fashion cycle (two couture and two ready-to-wear). Three years later, Saint Laurent told Newsweek, "I've made a rope to hang myself with. I'd love to do fashion when I want to, but I'm a prisoner of my own commercial empire."


Later that year, he suffered another breakdown and was hospitalized, but this time with far less traumatic results. In fact, while there, he conceived one of the most legendary, celebrated collections of his career: the Ballets Russes couture collection.

Grace Mirabella, Vogue's editor-in-chief at the time, said, "I don’t think any of us will see a presentation like that again. It's been a long time since we had that sense of excitement about clothes. In fact, I'm not sure I've ever seen it."

But something in Saint Laurent was broken, and after that, he was never the same - as a man and as a designer. He and Berge began living separate lives, keeping separate apartment, and Saint Laurent became increasingly reclusive and fearful, "obsessively rereading Proust and amassing a vast collection of objets d'art." More meltdowns followed, and, according to Voguepedia, "while Saint Laurent always commanded respect - as an oracle touched with genius - his collections would never regain their luster or originality."


In 2002, after years of bad health, relapse, and recovery, Saint Laurent retired and presented his final couture collection, saying in a statement, "I have grappled with anguish and I have been through sheer hell. I have known those fair-weather friends we call tranquilizers and drugs. I have known the prison of depression and the confinement of a hospital. But one day I was able to come through all of that, dazzled yet sober."

Saint Laurent died six years later of brain cancer. He left behind two generations of designers inspired by his groundbreaking career and a fashion house that continues to excite fashion lovers around the world. At the time of his death, as happens with all great artists and cultural icons, his legacy was brought into sharp focus. Rather than dwelling on his turbulent personal life, his accomplishments as a designer were celebrated. As French President Nicolas Sarkozy said in 2008, Saint Laurent was "the first to elevate haute couture to the rank of art, and that gave him global influence."